We talk about a stroke when certain parts of the brain had a lack of oxygen, resulting in impaired neurological function. The symptoms depend on the affected part of the brain. There might be a paresis, a loss of sensation or vision, difficulty with speech, dizziness, …. In case of a TIA (transient ischaemic attack) the symptoms last less than 24 hours, because the oxygen supply restores spontaneously.

A stroke might be caused by a bleeding in brain tissue (haemorrhagic stroke) or by a blood clot obstructing a blood vessel (ischaemic stroke). Most of the strokes are ischaemic. Usually on admission a CT scan is done to exclude a haemorrhage and to search for major blood clots. If an ischaemic stroke is suspected and the patient is in the hospital less than 4.5 hours after onset, medication can be administered trying to resolve the blood clot (thrombolysis). If this medication fails and if a blood clot is clearly visible on imaging, the clot can be removed mechanically (thrombectomy).

In case of a (suspected) stroke or TIA, people should be admitted to the stroke unit and have a broad cardiovascular check-up. Usually a MRI scan is done to get more detailed imaging of the brain and to specify the affected brain region(s). 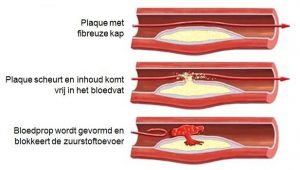 Most of the strokes or TIA’s are caused by a clot obstructing a blood vessel. As part of the check-up we test blood samples. In young patients a clotting disorder might be the cause of the stroke. In many older patients, a clot is formed by atherosclerosis. This is a slowly occurring process of growing fat (mainly cholesterol) deposits in arterial vessel walls, forming a ‘plaque’.  The plaque might grow and obstruct the blood vessel or more frequently disrupt, making a blood clot obstructing the vessel.  Sometimes a small particle of a blood clot gets loose (embole) and obstructs another blood vessel downstream.

Because atherosclerosis is promoted by high blood pressure, diabetes, smoking and high levels of cholesterol in the blood, these factors are all checked during admission.

Usually the cervical blood vessels (the ones in the neck), are imaged. In case of a major narrowing, surgery might be necessary to restore blood flow.

The heart is checked by echography and the heart rhythm is registered by monitor and a 24 hour registration (holter). Some arrhythmias (commonly atrial fibrillation) increase the risk of forming small blood clots in the heart (emboles).

The above mentioned examinations, help us to prevent the occurrence of a new stroke or TIA. Usually medication is started to prevent blood clotting eg aspirine, clopidogrel or direct anticoagulants. To rehabilitate, physiotherapy, ergotherapy and/or speech therapy are started. If necessary, the patient should be transferred from the stroke unit to a rehabilitation centre.

Dr Hauth has a special interest in stroke.

This website uses cookies to improve your experience while you navigate through the website. Out of these cookies, the cookies that are categorized as necessary are stored on your browser as they are essential for the working of basic functionalities of the website. We also use third-party cookies that help us analyze and understand how you use this website. These cookies will be stored in your browser only with your consent. You also have the option to opt-out of these cookies. But opting out of some of these cookies may have an effect on your browsing experience.
Necessary Always Enabled
Necessary cookies are absolutely essential for the website to function properly. This category only includes cookies that ensures basic functionalities and security features of the website. These cookies do not store any personal information.
Non-necessary
Any cookies that may not be particularly necessary for the website to function and is used specifically to collect user personal data via analytics, ads, other embedded contents are termed as non-necessary cookies. It is mandatory to procure user consent prior to running these cookies on your website.
SAVE & ACCEPT